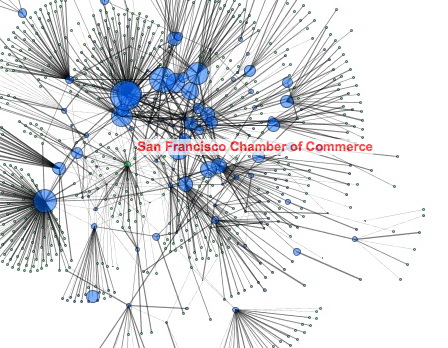 I’m very interested in trying to figure out ways to map the political landscapes and power structures that are operating around us. I’d like to be able to see various organizations and political actors in the context of their allies, enemies, and supporters in order to understand where the political boundaries are between various factions.

A few weeks ago, David Wolber passed me a version of the 2008 SF Ethics Commission campaign finance data that he used to build the OpenCampaigns.com website. Since the hammer is use to hit everything with is network visualization, I did a quick pass of name and id matching for organizations and committees to resolve some of the data into a relational form. I set up a page with some visual examples with mouseover labels. These images use only the “Form A” data- the amounts each committee said they received. Information on payments and loans is also available, but not included in these maps. These maps are only looking at a very, very specific kind of relationship (disclosed campaign contributions) between organizations so clearly do not capture the full richness of the alliances that make up city politics.

I don’t think this first pass is terribly insightful, but there does appear enough structure to be intriguing. I’m gonna run some clustering algorithms to see if they can pick out some of the coalitions. I would also like to collect some attribute information about the political positions of some of the individuals and groups. If you know anything about SF city politics and are interested in playing with this, let me know.