This is a catchall post to collect together a number of interesting network images I’ve run across in the last few years. The common feature is that they are all networks that are based in or arise from geography or spatial processes. Unlike most of the networks we often have to work with, these are mostly “planar” (or nearly so) meaning that they can usually be drawn in two dimensions with minimal crossing and distortion. 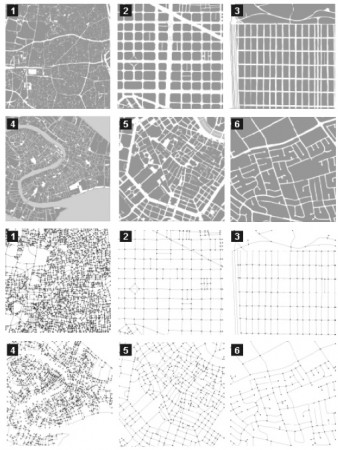 In The Network Analysis of Urban Streets: a Dual Approach Sergio Porta, Paolo Crucitti and Vito Latora convert city streets to networks and examine some of their properties. Figure 2 of the paper below

The six 1-square mile samples of urban patterns (above) and their primal graphs (below): 1. Ahmedabad; 2. Barcelona; 3. San Francisco; 4. Venezia; 5. Wien; 6. Walnut Creek. Cities are so diverse that, at a first sight, it seems hard to imagine that they share any common — though hidden — pattern, which is what they actually do.

Things that flow on the map 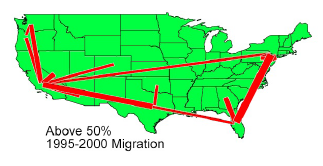 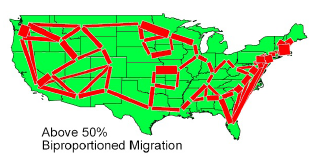 Although I didn’t really understand how the complicated matrix renormalization and hierarchical clustering works, Paul B. Slater produce some interesting images of migrations of U.S. college students (1965-1970) in Hubs and Clusters in the Evolving United States Internal Migration Network. The first image shows non-normalized flows (thresholded to show top 50% of ties?) the second show the “doubly standardized” version which reveals more local structure and local flows. Looks intriguing if I could figure out what he did.

In the paper Force-Directed Edge Bundling for Graph Visualization Danny Holten and Jarke J. van Wijk do lovely job with the U.S. migration flows (from California?) while demonstrating their edge-aggregating layout algorithm. 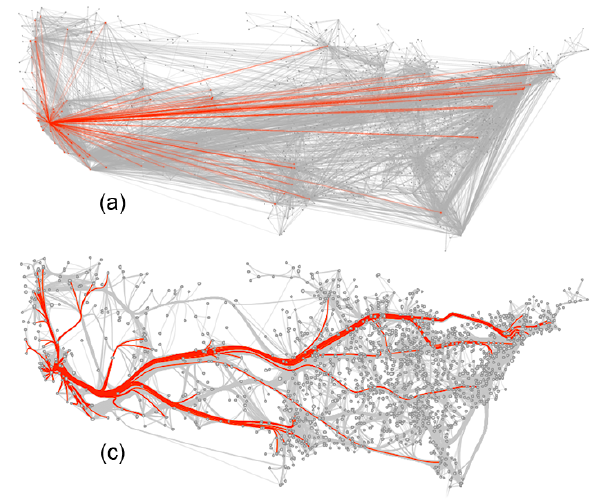 The data here are also migration between US cities with the flows (into?) the SF Bay Area highlighted in red. The top image (a) shows a “normal” network map if each city node is plotted at its geographic coordinates. Although this map arises from a geographic process, it is not at all planer. The lower image (c) shows the results of the authors layout technique: reducing the visual clutter by bundling nearby edges together to form fictional “roads” between the cities. 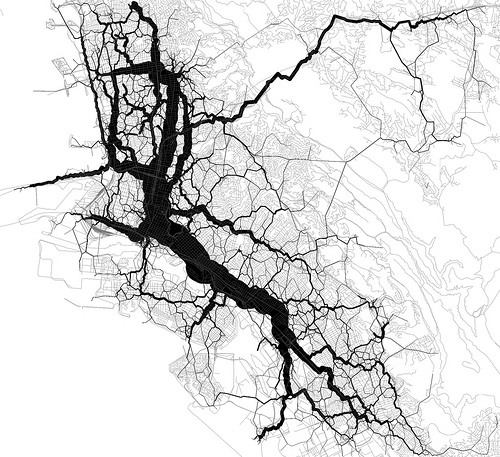 The Where’s George? dollar bill tracking project continues to trace out the flows of U.S. currency as it diffuses across geography (‘tho not much of a net when looking at just one path). 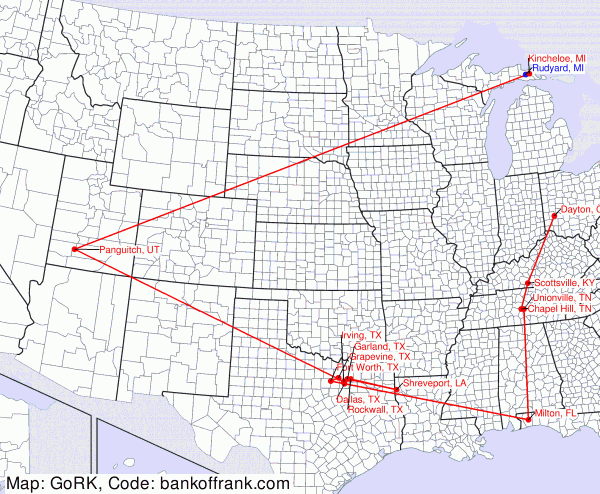 I have a hunch (but no stats to back it up) that the sorts of networks generated by process that essentially operate on an a flat substrate may be structurally different (have certain specific network properties) than the kinds of networks generated from processes like citations, campaign contributions, ownership relations, or other less-geographic systems.

One thought on “Plane Old Networks”