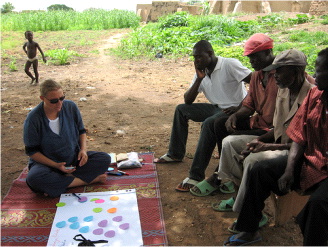 I’m working on a project for AAAS’s Science and Human Rights Program to identify some possibilities for human rights uses of networks and network visualization. In the process of doing a quick web review of existing work, I located a couple of interesting examples of people using networks as a grassroots tool to help stakeholders develop analysis of the power networks they are embedded in as a strategy tool. Also great to see such a low-tech solution.

The NetMap toolkit developed for IFPRI by Eva Schiffer makes use of boardgame-like tokens which can be used to represent the various actors, their relative power, positioning, and modes of power. Relationships (drawn as lines on paper) and positioning are determined by participants as part of the discussion. The resulting maps are recorded by the researcher. (Why do I waste my time writing software? ;-) 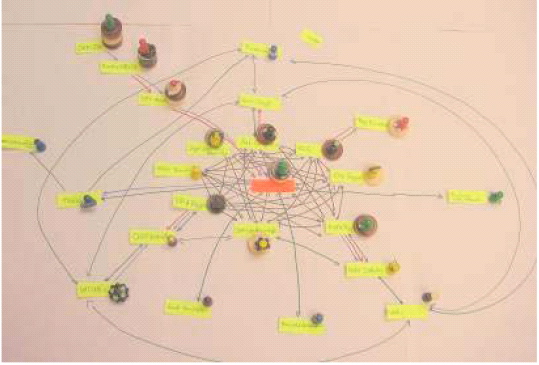 “So far, the game was basically used in an extractive way, for collecting data. But in a number of interviews with small groups (2-3 people form the same stakeholder-group) it became apparent that it could also be a tool to stir and structure a discussion. In one case an NGO employee had set-up his Power Map when two colleagues entered the room. While first only observing and listening to our discussion, they soon started adding their views, agreeing or disagreeing and giving their own explanations.” [from here]

Another neat example is the power-mapping tool developed by AGENDA (Action for Grassroots Empowerment and Neighborhood Development Alternatives), a South Los Angeles community organization. The technique doesn’t include specific relational elements, but provides a framework for positioning allied and oppositional groups on two axes (vertical axis as power, horizontal as support / opposition) in order to develop a plan of action.