Phil Howard has built another corporate consolidation dataset, this one on ownership networks of seed distributors. 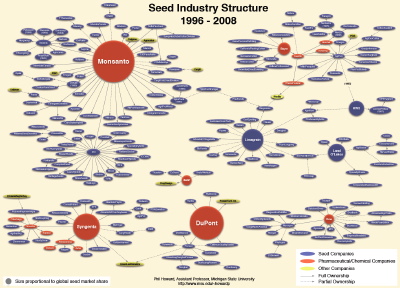 According to his paper the data came from an industry competitive intelligence report, augmented by diligent googling. I believe the image was created with OmniGraffle. He also created an animation of the time aspects.

Although several of the parent companies appear in FEC subsidiary data, most are foreign companies, so we only have subsidary trees for Monsanto, DuPont, Land O’Lakes and Dow Chemical.

The image below shows the ownership network hierarchy for Dow Chemical alone according to what we could parse out of their 2009 SEC filings. It does not include the seed brands as distinct nodes as Phil’s image does, and includes many subsidiaries that are not involved in seed production. 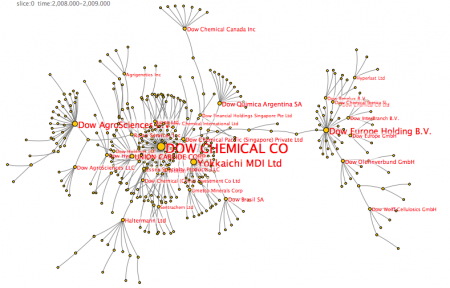 I think it is very interesting how different data collection questions, boundaries, and domains of interest produce different network images of corporations and industries. I wonder if we will ever get as sophisticated at imaging corporate structures as MRI machines are with physical bodies, able to view from multiple perspectives at will…