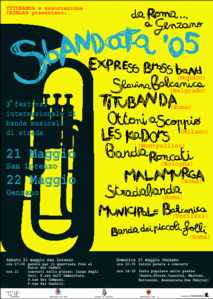 Last year the HMB came. The Brass Liberation Orchestra couldn’t make it, but at the moment I’m living in italy, so I was tagging along behind Fiati Sprecati from Florence, some of whom I know because their connections to the BLO in San Francisco. They tolerated my very unpracticed but enthusiastic bashing at the snare drum, and generally made sure I was pointed in roughly the right direction. Fortunately, I knew most of the songs they were playing, either from the BLO, or from CDs. My italian is very limited, but the level of confusion was high enough that it didn’t really matter. Plus half the people were French or German. (Unfortunately they stopped the Serbians at the border. ) And most of the time the volume made conversation was impossible.

I drank a lot of beer (to help with my rhythmic sense) The nice thing about italy is that if you are in a city you are never more than about 50 feet from a bar. So if you are drunk, and have some change in your pocket, a bottle of beer can appear almost like magic. Also 5 liter jugs of wine. And of course nobody gives a shit if you drink in the street. In fact on saturday night there were several hundred people packed into the square in the working-class San Lorenzo neighborhood, for a sort of acoustic rave with I think eight (I never managed to get a good count, because the bands kept merging) bands trying to blow their lips off. At one point the trumpets from Fiati were all hanging up in a fence above the rest of the band. Later, the bass drum suddenly stopped. I looked around confused, and discovered that she was answering her phone and had walked off. Didn’t seem to borther anyone. 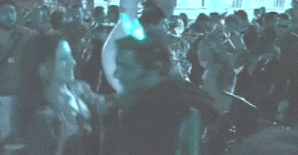 At I think 3 or 4 am, we started to slowly drift back to the school, but this took a hour to go a few blocks. Every-time we’d start to move, somebody would start noodling around on some tune, and then, *pow*, 20 horns would pick it up and everyone would stop to dance. It was beautiful. I’ve seen large jam sessions before, but this was really big, and really tight.

And of course more beautiful women (and men) than I have seen in one place before. I’m starting to realize that I am strongly attracted to women who run around carrying large shinny pieces of metal and making loud noises. (I’m passing up the obvious pun here…) Amazing to find a counterculture in which I felt at home. These are people from all over the world, but everyone seemed to share an incredible enthusiasm for music in the particular intoxicating form. And nobody played “its a small world..” Actually, everyone seemed manage very well to have fun, play seriously, but not take themselves seriously.

When we arrived at the smaller town outside of Rome, instead of sending a double wall of black-clad riot cops, the police sent their marching band (they were pretty traditional, but who’s complaining). Such a difference from NYC or SF. I heard that two members of the police band eventually “defected” with their clarinets. In fact, the only other cops I saw all weekend were the occasional traffic cops, and their job was to stop cars for us, not the other way around. Nobody EVER mentioned anything about staying on the sidewalk, (although this statement is a bit deceptive, because many streets don’t have them). But this is the same country where they beat the shit out of everyone at Genoa a few years ago. Things are just a lot less controlled here I think.

We made an obligatory tour around town with the rumba band. Started out mostly trading songs, but eventually merging so they were playing under Bella Ciao, and we were trying to get the samba rythms. All while winding up between stone houses above a lake on street that was really just a twisty staircase. Italians must have superior motor skills. I had earlier noticed that most people seem to be able to ride a bicycle on cobblestones through a crowd while holding an umbrella, smoking, and simultaneously sending a text message. But now I witnessed people with the ability to hold a jug of wine, a splif, and a tuba, while dancing uphill and producing a perfectly interlocking set of Um-Pah’s at 180 bpm.

And then coming back down onto the town, six people wide, with the huge bass and dancers, (sound REALLY carries in this sort of situation), and people dancing in the square way down below I felt like we were kings of the world. But also made my hair stand on end, because we were playing the same song as on the 2nd day after the Iraq war started, and I was feeling similar sense of invincibility as when we were dancing up a deserted Market street right before they arrested all of us. But not this time.

Most unusual song (that I recognized) arranged for a brass band: “Sweet
dreams (are made of this)”

Most picturesque moment: 8pm sunday evening. All the remaining bands lying down on their backs on the warm cobbles of a steep street above the town, exhausted, but still playing after 72 hours.

I understand the next unreasonably large horn event is in June, Marseilles, but with 40 bands.

When is the US going to have Sbandapoluza?

If you have realplayer, and a decent connection there are some video clips from an Italian magazine of experimental art: