Political theater in the internet era. Who knew it could be so much fun? I like how the woman at the check-in desk cracks up when the singing starts…

An update and more background:

This action was far more successful than we imagined. Two weeks after it was posted, the video has almost 170,000 views, thousands of blog links, lots of international commentary, the boycott got some press attention, and the hotels are pissed. As always, something like this only happens when lots of talented people pull together, have good luck–and also work really hard.

Paul Hogarth’s article (“Caught in a Bad Hotel” = The Future of Protest?) also got lots of re-posting. I very much agree with the point made there (and in other articles) that we have to adapt to current media. After the Vietnam era, politicians and media companies have learned not to show pictures of soldiers’ coffins or napalmed kids on the evening news. Media is more fragmented new, there are more than three TV stations, the audiences are split and polarized. We are over-saturated with depressing information and calls to action. Of course most current issues deserve much more militant actions than just silly YouTube videos, but if this is what people respond to, lets use it. If it takes song and dance to get us out in the streets for a few extra hours for a good cause, lets do it.

I’m not sure that this video was really any thing new. Or at least, if this is the future, it is one that draws heavily on the past. This is a very old form of performance politics which people have been doing for hundreds if not thousands of years. Popular songs have always been reworked for political messaging. Only difference is that now we can dramatically magnify the audience via the web so it doesn’t matter if there are only a few people there to see performance that took hundreds of unpaid person-hours to create.

I’m a member of the Brass Liberation Orchestra and part of the team that helped organize the “Bad Hotel” action. Here is what I learned from doing this:

SF Pride at Work / HAVOQ / One Struggle One Fight had a very smart and savy media campaign and a well-targeted message.

The goal of the video was to alert mainstream gay folks visiting San Francisco for Pride weekend about the hotel boycotts, and ask them not to stay in those hotels. Even if people hate the performance or disagree with the goals, they still at least learn that there is a boycott.

The performance was crafted appropriately for the audience, participants, message, and current cultural landscape.

I think the Lady Gaga angle helped, love her or hate her, she’s really ubiquitous right now, the song is catchy and already stuck in people’s ears, so our video was able to hitch a ride for free. Would people have responded as well if musical-theater-based shows like High School Musical and Glee weren’t so popular?

Rather than try to make a very small splash in a very big national pond, the message was focused for a tight subculture

. The distribution strategy was to have participating folks in the Bay Area (mostly queer) share the video out through their email and social networks, assuming that this would trickle out to broader gay social networks nationally. The organizers also had contacts with LGBT blogs in major US cities. Once the message was widely spread and the views were high, it spread out into more general lefty and mainstream press. Most of the traffic actually came from email (73%), which means lots of people must have contributed to the effort by forwarding to their friends. For all its vaunted popularity as a viral engine, Facebook contributed only 5%, and Twitter brought in <1%. The demographics started out centered on 35-44, majority female, and shifted to an older and more male audience.

Overall, the video showed a standard spike and long tail of viewership. 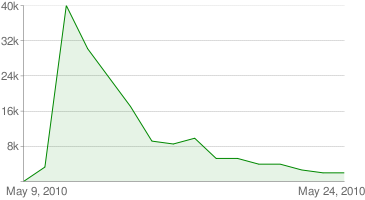 Bloggers and news media are er, well, lets just say overworked and on a tight deadline.

If you give them a good story, they will carry it, but they are not likely to do background research or editing to fill out the story background on their own. Jamie LeJeune did a very professional job editing the video, SF Pride at Work did a great job on the press release story. Most news reports used passages from the press release verbatim. Mainstream TV news used the flashmob story and footage, but did send their reporters to the union’s boycott pickets for the anchor backdrop, giving the issue more local coverage.

We learned from what worked on the Hey Mackey video.

I believe that the only way it was possible to pull off moderately risky “secret” action involving this many people was that many of the people in groups involved have worked on political projects and partied together for years. A high level of trust makes it possible to work quickly and effectively with lots of task delegation. And people knew what friends to call on for specific skills.

Doing an action that is fun is surprisingly contagious.

We were all having such a good time, it was hard for people not to join and laugh along with the joke. We had a security / outreach team ready and trained to try to intervene keep everyone safe, but nobody in the audience or hotel management reacted badly (don’t know if we’d get such a good response a 2nd time…). A few bystanders actually joined the dance. When we paraded up to the second hotel, the management actually invited us inside to do the performance. I presume that, since very few customers were there, they thought it was better than having us picketing out front (‘tho we did that to).

Why did we do it?

Sure its a “bad economy” but why should workers who are barely getting by be asked to take a cut in pay and health benefits when the owners are still making big bucks? According to SF Pride at Work:

The Starwood Corporation made $180 million in profit in the first nine months of 2009. The Hyatt Corporation generated $950 million for its majority owner – the Pritzker family, and Hilton Hotels recently announced that they have $12.6 billion in available capital to invest in new high-asset ventures over the next several years.

To learn more about how to honor the boycott and support the workers visit sleepwiththerightpeople.org or hotelworkersrising.org

One thought on “Caught in a bad hotel..”