I worked for a year or so as a consultant at ATA SpA in Lucca Italy. ATA (now defunct) was a academic spinoff/tech startup that works with various kinds of networks. Especially networks relevant to the bio-pharma industry, such as patent citations, term co-occurrence in medical journal abstracts, co-authorship, etc. Overall the goal was to come up with systematic techniques for creating overviews research domains (or other proprietary DBs) that allow the user to locate interesting regions and then inspect the underlying data. This is an area many researchers are focusing on, but I think part of what was innovative about ATA’s Dynet project was its focus on networks that are evolving in time.

An image I helped design as part of ATA promotional materials: Time-sliced view of hypothetical network trajectories of individuals involved in the terrorist attack in Spain, March 2004. (Data from J. A. Rodriguez)

I was primarily engaged with the programing team designing visualization tools capable of working with large, attribute rich, multilevel, dynamic networks . We were particularly focused on ways to store dynamic data in SQL databases so that the software could efficiently generate n-partite graphs for arbitrary time ranges.

Although the project was exciting, I found working in Italy to be somewhat logistically complicated. The balancing act required to function simultaneously in the academic and proprietary commercial realms was tricky at times. I hope to collaborate more with ATA in the future.

ATA’s work exposed me to a number of interesting problems that continue to interest me:

As mentioned above, ATA SpA has gone out of business and the website no longer exists. However, I think the brochure is still a very handsome explanation of some network visualization and data-mining techniques. 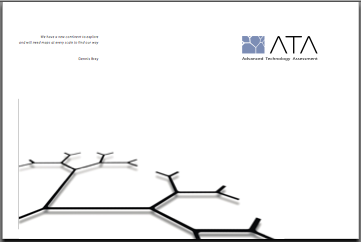