DASW was an SF Bay-area umbrella group for coordinating non-violent direct action against U.S.-lead wars for global domination. Using classic “spokes-council” organizing model, thousands of people were able to coordinate their actions well enough to shut down the SF financial district during the first days of the invasion of Iraq. More than 2000 people were arrested or detained over several days of protest, only a handful were even charged of any crime. The website provided analysis, calls to action, and some information on legal support and non-violent direct action organizing. Although the guts of the website was written by others (DT) I assisted with content management.

DASW groups were also involved in infamous Oakland Docks Picket when the police opened fire with rubber-bullets on non-violent picketers without provocation. The OPD has recently settled some of the numerous lawsuits brought by protesters and dockworkers who were seriously injured by police violence. The OPD has been unable to justify their actions, but it is strongly supposed that they were given extremely exaggerated intelligence about the supposed aims of the protesters by the newly formed California Anti-Terrorism Information Center (CATIC) including quotes from the website with “non-violent” language selectively edited out. (Oakland Tribune, May 20, 2003 Brenda Payton)
Unfortunately, as of 2006 DASW is no longer functioning, and the website is off-line. Some of the information from the site still persists in the internet archive. 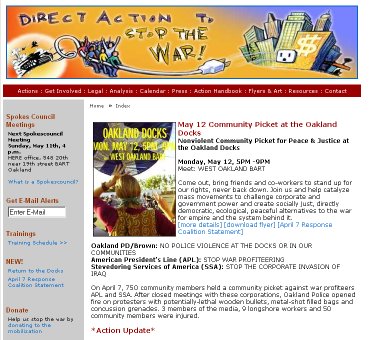 Some other news articles related to DASW actions:

3 thoughts on “Direct Action to Stop the War (DASW) Site”