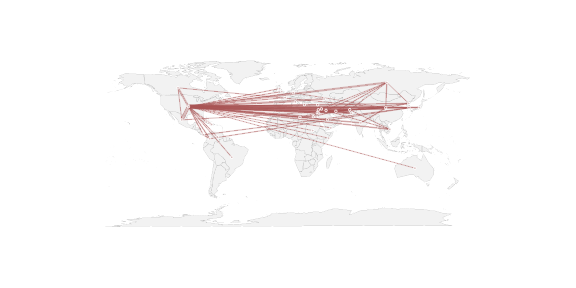 First we load the libraries

Usually the hardest part of working with geographic data is doing the “geocoding” to assign latitude and longitude to data points (vertices). For this example, we can grab a dataset, courtesy of Katherine Ognyanova, that has already been geocoded from http://kateto.net/countries This is a dataset of co-occurrences of country names in statements by U.S. Congressmembers.

The first file contains node-level data about all all of the countries, including the latitude and longitude data we will use

The second file contains the pairs of country-country names and information on the number of term co-occurrences. We will use this to create the edgelist.

Because there are a lot of edges in this network, if we plot the whole thing it will be visually unintelligible. So we can filter on the Tot_cooc variable to only include relationships between terms that have a total coo-occurrence of more than 500 times.

80 relationships seems a lot more workable, so lets convert the edgelist into a network, bringing along the total co-occurrence variable as an edge value attribute.

Because we reduced the set of relationships, we also reduced the set of vertices from the full list of countries. So we now need to match up the coordinates in the rawnodes file with the right vertices. For convince, we attach the lat and lon to the network as vertex attributes.

Now we can actually do the plotting of the world map with the map() command, followed by the plot.network() command. Note the the new=FALSE argument that tells it not to erase the map before drawing the network. The coordinates are passed in via the coord= argument as a two-column matrix.

For this network we see that a lot of the ties involved the US. Not surprising, but may not be the most interesting feature of the data. So might be worthwhile to remove the USA vertex and lower the filtering threshold … but this post is supposed to be just about the mechanics of overlaying a network on a map.

However, it is often the case that geographic positioning of networks doesn't do a great job of revealing the network structure. The map is essentially providing geographic context and implicit labeling, but if the underlying data is not drivien by geographic proximity important details can be obscured. For this example, I think it would be more intepretable as traditional network diagram where vertex positions are determined by network proximity.

Katherine Ognyanova also collected a number of posts on how to draw Great Circle curves on maps in R. These may help a little bit with edge overlap, but to use them you will need to roll-you-own network rendering code. This one is from Flowing Data: http://flowingdata.com/2011/05/11/how-to-map-connections-with-great-circles/ There are of course lots of cases where you might want to do more sophisticated things with map projections. But for a quick-and-dirty plot, network seems to do pretty well. Of course I'd love to do the animated version of this with the ntdv package, so please contact me if you know of an appropriate dynamic dataset with geographic coordinates.

P.S. I was able to write this in rmarkdown and have it post directly to the blog using the RWordPress package! http://yihui.name/knitr/demo/wordpress/

4 thoughts on “Network-on-a-map in R”